Hot Soup for All

This year’s Swiftsure Race was, quite literally, a breath of fresh air. After two years of pandemic cancellations, racers were ready for the return of the Pacific Northwest’s premier distance race run on Memorial Day weekend. With westerlies blowing 25 to 30 knots and 6- to 10-foot waves to play, the race’s nickname “Driftsure” thankfully didn’t apply, and the downwind flyers had their day. 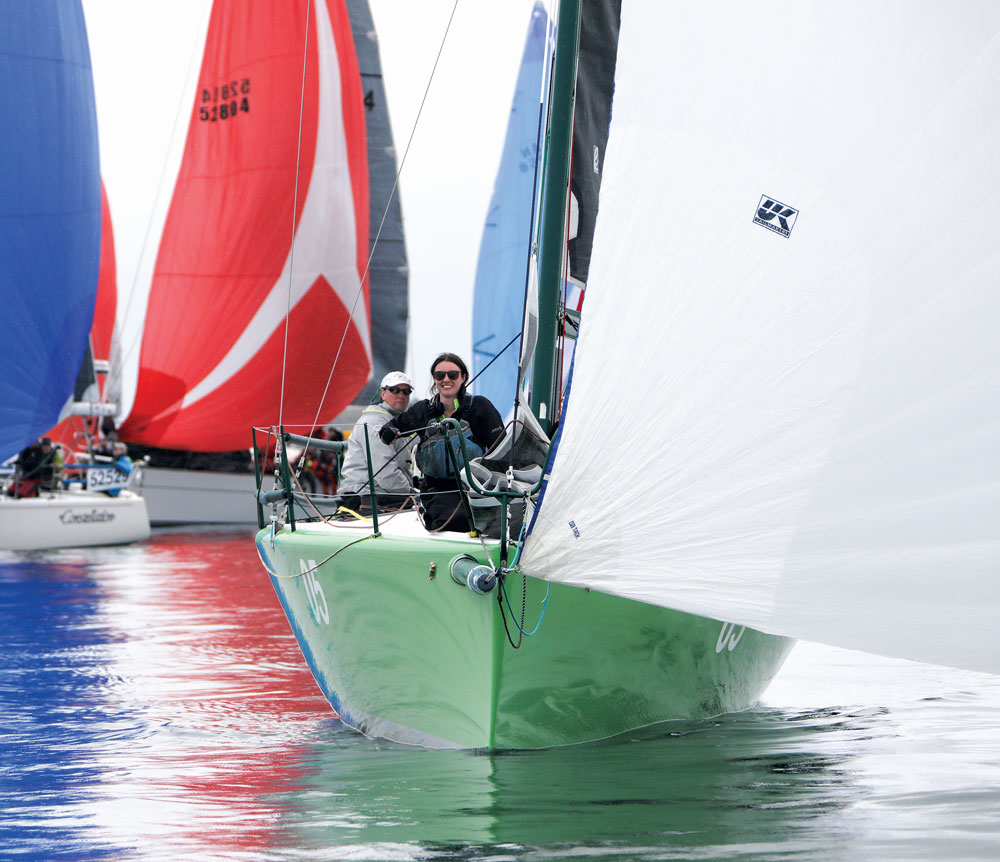 The Farr 36 Annapurna slowly gets off the starting line on her way to winning the Swiftsure Cape Flattery course.
Jan Anderson photo

Swiftsure is, in a sense, more than a race. It’s an opportunity for Canadian and U.S. sailors to renew friendships and rivalries, and the sailors were starved for it. It’s a chance for boats that often sail in the light winds and calm seas of the Northwest to poke their bows into the rollers coming off the Pacific and maybe, just maybe, get the winds to match.

And then there’s the setting. First, it’s Victoria’s inner harbor ringed with elaborate gardens, an explosion of floral colors and the Château-style architecture of the Empress Hotel. Once on the race course in the Strait, the snow-capped Olympic Mountains provide an almost unreal backdrop.

The committee boat, no less than the Canadian Navy’s HCMS Edmonton, sent the racers off in Driftsure conditions. Downwind sails and a current soon turning from an ebb to a flood did not bode well. But everyone knew that a stiff westerly would come. It was just a matter of time. Knowing the flood at Race Rocks, the shortest path to the Strait, would soon be 5 knots, the fleets headed south for the American shore rather than brave Race Passage.

In an ongoing effort to attract racers, Royal Victoria Yacht Club has come up with creative Swiftsure courses over the years that naturally seems to have separated the fleets into similar boats and programs. Swiftsure Lightship Classic, the original, still goes out to the Swiftsure bank for a total 138 miles, and very few boats do it. The Cape Flattery course has the fleet round a mark at Neah Bay, just short of the Pacific, and then return for a total 102 miles. The Juan de Fuca fleet rounds at Clallam Bay on the U.S. shore and returns for a total of 79 miles. Boats rating PHRF 40 and above are allowed in this class.

The reward is a cup of potato soup, a Swiftsure tradition.
Frederick Savoye photos
The new 123-mile Hein Bank course does not go offshore, but adds distance by having the fleet round Hein Bank southeast of Victoria. This race was scored under ORC and featured the higher profile racing programs in the Northwest. The Hein Bank course removes the frequently drizzly and drifting Pacific miles of the Lightship course.

The wind piped up perfectly as the Hein Bank fleet beat along the American shore to Neah Bay. It was there that the leaders could hoist their A-sails and fly downwind. The Paul Bieker-designed Riptide 41 Blue and the Riptide 35 Longboard flying downwind corrected to first and third, with Steve Travis’s TP52 Smoke coming in second.

Mike Schoendorf has been campaigning Blue both on the Great Lakes and the Pacific Northwest, and no doubt it was refreshing to get an unabashedly good hard run where the hard-chined speedster could strut her stuff. Blue surfed along steadily at 17 knots hitting 22 knots in the puffs.

“Blue has no quirks that I’ve seen. That make it easy to push her confidently in the dark,” said crewmember Joe Bersch.

No doubt she was giving fits to the larger boats, and at one point even passed the TP 52 Glory. Similarly, Peter Salusbury’s Longboard had an epic night.

“The run back was fast and fun but nerve racking at times dodging freighters, cruise ships and those sneaky Clallam Bay boats with no AIS transponders,”  Salusbury said, who was sailing his 48th Swiftsure. “Planing downwind in the pitch black at 15 knots was a blast.”

On the Cape Flattery course it was Iain Christenson’s bright green Farr 36 OD Annapurna that won both on elapsed time by 43 minutes and corrected time, edging out the well-sailed J/109 Double Time and XP-44 Maverick.

It’s safe to say that the 2022 Swiftsure exceeded expectations and put the Driftsure moniker on hold for a while. The pre-race camaraderie was excellent, the conditions dry (albeit cold) and windy, and the chance to be racing again wonderful. Even the trip back for Seattle boats was a treat, with boats enjoying the big westerly for the ride home right after the safety inspection and breakfast.

“The ride home may have been the best part of Swiftsure,” said Molly Howe, Freja crewmember.

And the safety inspection? The committee brought much appreciated potato soup to the competitors just off the course while they checked the gear. What would you expect from the Pacific Northwest, and Canadians in particular?

The racers are starving no more. --Kurt Hoehne