Flares are expired. Now what?

Two Rhode Island men must pay fines for shooting emergency flares into the night sky to celebrate a friend’s wedding. The red aerial rockets set off a costly search-and-rescue operation by the U.S. Coast Guard that responded to a possible vessel in distress off Block Island.

The men were fined $10,000 in federal court in October 2021. The case dredged up discussion about how to lawfully dispose of outdated or unwanted handheld and aerial flares since some sailors simply ignite them.

Common methods of disposal, not all of them legal or environmentally sound, have included setting off the flares in remote areas, tossing them overboard or submerging the volatile devices in a water-filled metal bucket.

Some sailors have attempted, usually without much success, to donate the outdated flares to public safety groups for training purposes, or to deliver them to police and fire stations for disposal.

Emergency marine flares expire 42 months after the date of manufacture. 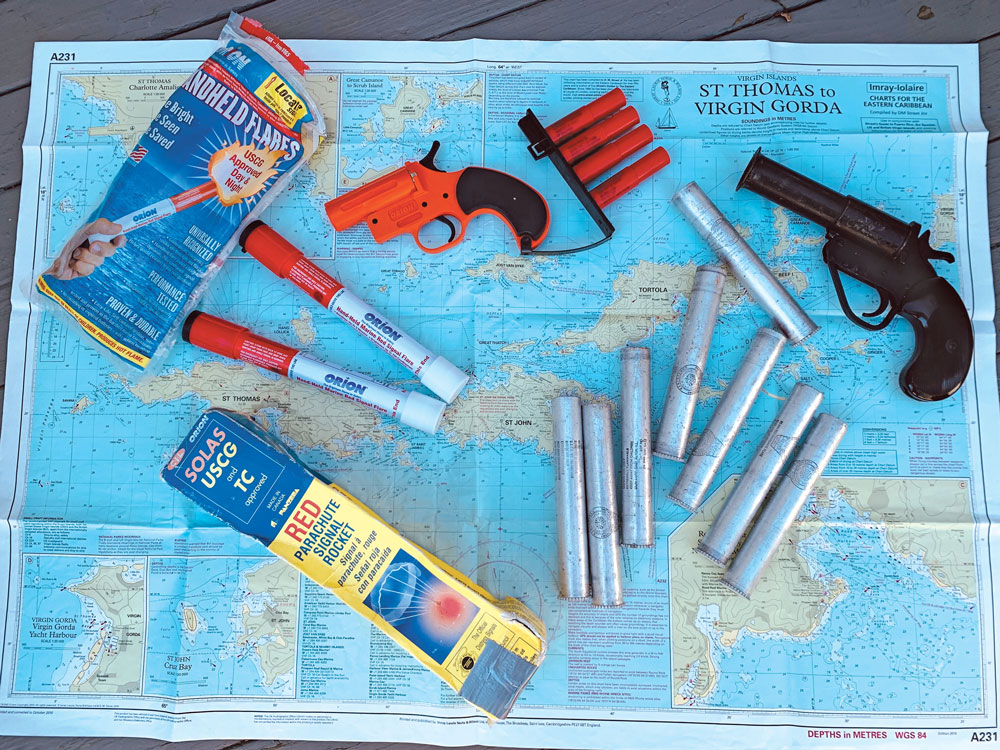 Orion, a popular manufacturer of marine flares and signaling devices, offers advice about disposal on its packaging. Among the recommendations: donate expired flares to U.S. Coast Guard Auxiliary or Power Squadron for use in their training classes; ignite handheld signal flares on land in a safe area, much the same as highway flares would be ignited; retain flares for back-up use to expand signaling time in the event of an emergency; never jettison flares overboard; never activate marine flares in non-emergency situations over regulated waters; never dispose of flares in household trash.

According to the Coast Guard auxiliary, there is no consensus on whether to keep outdated flares on board. The agency does not recommend it.

“Retaining them on board a vessel as backups may not be a good idea since older flares may become unstable and their burn rates unpredictable,” auxiliary spokesperson explained in one of its publications. “If you decide to do this, they should not be kept with current flares. Store only the most recently expired units in a separate container clearly marked as expired.”

Interestingly, the auxiliary and Power Squadron are no longer permitted to accept outdated or unwanted marine flares of any kind. Instead, it suggests boaters seek assistance from local fire departments for possible flare disposal in their burn units, or from public works, sanitation, or hazmat units capable of handling ammunition. Local, state and federal laws vary widely when it comes to disposal of marine flares, which are considered pyrotechnic devices and therefore subject to laws pertaining to the handling and transportation of explosives.

As for plunging outdated flares in water, the auxiliary noted the devices contain perchlorate,  a non-environmentally friendly pollutant described by the EPA as a likely carcinogen and the suspected cause of endocrine and reproductive problems. According to the Auxiliary, “Soaking the flares in water as a means of disposal is not a viable solution.”

In addition, the shells are typically waterproof and the dangerous chemicals will remain active despite an overnight soaking. Local fire, police and public works departments often have no means of disposing of flares dropped off by resident boaters. Flares tossed into dumpsters have been known to ignite fires after being transferred to trash collection trucks, as occurred in one small Massachusetts town.

Although some communities provide disposal solutions for outdated flares, most don’t. West Marine, a nationwide retailer of marine flares, does not permit customers to return them.

Last February, Maine Rep. Joyce McCreight proposed to the state legislature a program that would collect and dispose of expired flares using a mobile incinerator. The proposal was not voted on due to COVID.  A similar plan was introduced in Florida where the Sea-Tow Foundation is collaborating with the Coast Guard.

Meanwhile, sailors each season typically inspect their inventory of emergency signaling devices, perhaps deciding to keep most aboard because disposal options are unlawful or unavailable. And though sailors may be tempted to fire outdated rockets far out to sea, they fear the result could resemble what happened in Rhode Island.

In that case, the Coast Guard filed a civil lawsuit in U.S. District Court in Providence against Perry Phillips, 31, and Benjamin Foster, 33, for illegally discharging flares.

According to court documents, the men told investigators they borrowed a flare gun and flares, then rowed a skiff just off Block Island’s Breezy Point where they were simply trying to get the attention of guests at a friend’s wedding reception.

Phillips and Foster filmed themselves launching the three red aerial flares and posted the video on social media minutes later.

The rockets were spotted by people on the mainland who reported a possible emergency. The Coast Guard deployed a surface vessel, two helicopters, personnel and equipment at a cost of more than $100,000. The search lasted hours.

A federal prosecutor alleged the men “knowingly and willfully communicated a false distress message and urged the Coast Guard to attempt to save lives and goods when no help was needed.”

Phillips and Foster agreed to pay separate $5,000 fines for illegally discharging the flares.

Marine industry and public safety experts in an effort to reduce the disposal problem have begun advocating sailors shift from using pyrotechnic flares to LED (light-emitting diode) models like those made by Sirius or ACR.

Just how pressing is the need for a workable disposal solution?

According to the organization Cape Cod Cooperative Extension, there are an estimated 250,000 out-of-date flares generated annually by Massachusetts boaters. The group publishes a contact list of municipal departments throughout the region where boaters can query about marine flare disposal services. No estimates were available for all 50 states.

Under federal law, every oceangoing vessel 16 feet and longer is required to carry emergency flares.